The Mom alley-cat that took up residence in my tiny yard (which gave birth to Caramel last year) does it again with another litter of three kittens: a gray and white, a gray and an orange. This time, I swear, I’ll do my best to ignore them! (Although if I lay hands on her I’ll make sure she’s being spayed) In the meantime: Congratulation for the cute kittens! 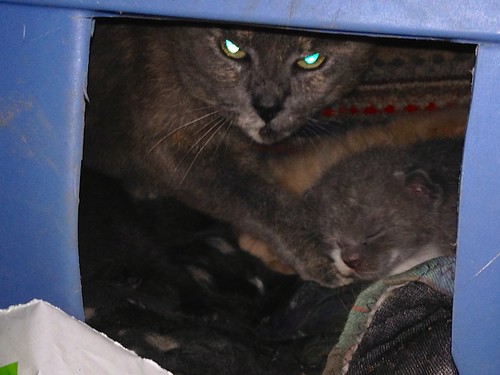 This is an attempt to produce an exhaustive bibliography about anime & manga (and it was extended to all the related aspects of Japanese Popular Culture). It is far from complete yet. So far we’ve only transferred the old version from the Protoculture website (adding links to WoldCat and, whenever possible, to Nelligan—the Montreal libraries’ catalog). We’ve added more books (whatever was published since we first started this bibliography; luckily we own a copy of most of these titles — the copy we own are on yellow background) and we’ll try to keep it updated as often as possible. [Last update: 2016-10-03]

This is an attempt to produce an exhaustive bibliography about anime & manga. It is far from complete yet. So far we’ve only transferred the old version from the Protoculture website (adding links to WoldCat and, whenever possible, to Nelligan—the Montreal libraries’ catalog). We’ve added more books (whatever was published since we first started this bibliography; luckily we own a copy of most of these titles — the copy we own are on yellow background) and we’ll try to keep it updated as often as possible. [Last update: 2016-10-03] 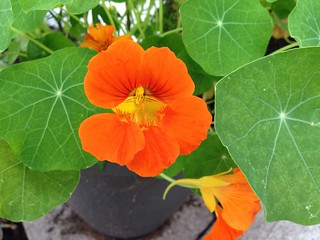 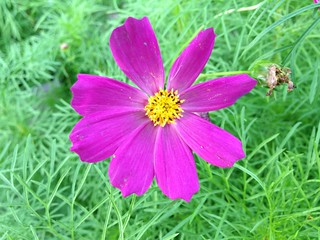 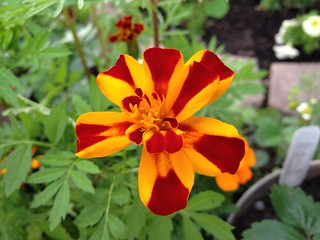 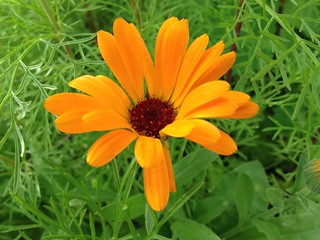 The english version is available on NFB/Interactive: Making Movie History – A Portrait in 61 Parts. 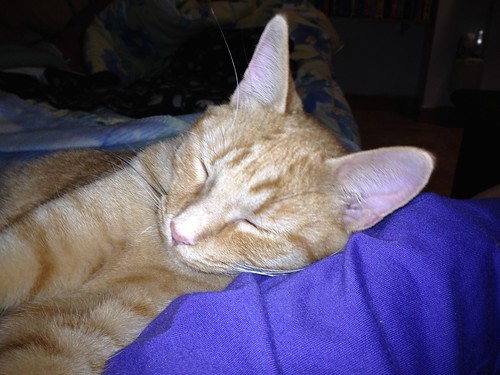 First, Fantasia will pay tribute to three legendary figures of the fantastic genre: Ray Harryhausen, Ray Bradbury and Forrest J. Ackerman. Through their work and energy, they have inspired many of the leading figures of genre cinema in recent decades.

Fantasia is also unveiling the 2014 poster art, inspired by an old legend from Québecois folklore: La Chasse Galerie (otherwise known as “the Bewitched Canoe”). It was created by award-winning Quebec illustrator Donald Caron.

The opening film has also been announced. Fantasia 2014 will launch with the Canadian premiere of JACKY IN THE KINGDOM OF WOMEN (Jacky au royaume des filles), a sharp political satire from comic book genius Riad Sattouf (LES BEAUX GOSSES) that took the Rotterdam Film Festival by storm.

Fantasia will hold a special screening of the hotly anticipated new instalment in the Marvel Cinematic Universe: GUARDIANS OF THE GALAXY.

Now with the announcements that are more in our sphere of interests:

A towering and truly unique figure in Japanese animation, director Mamoru Oshii will be a recipient of Fantasia’s Lifetime Achievement Award. From pioneering OVAs DALLOS and the haunting ANGEL’S EGG, and of course the beloved PATLABOR series, of the 1980s, through the dramatically influential global hit GHOST IN THE SHELL in the mid-’90s, to its award-winning sequel and other powerful, pensive works in the new millennium (SKY CRAWLERS, AVALON), Oshii has consistently strived to bring new ideas and in fact a whole new attitude to anime. With his meticulous and idiosyncratic near-future thrillers and dramas, linked by persistent themes, motifs and concerns, Oshii asserts a complex, deeply thoughtful and decidedly adult sensibility — while maintaining the highest technical standards in the field (and hardly confining his efforts to animation). In seeking a path to call his own, Oshii has blazed a trail for fantastic entertainment worldwide to follow.

Mamoru Oshii will be receiving his award on our opening night, July 17, before a special screening of the new HD master of GHOST IN THE SHELL, being re-issued by Manga Entertainment and Anchor Bay Entertainment in celebration of the 25th Anniversary of the original manga’s publication. This will be the first time the GITS HD print has been made available outside of Japan, lovingly restored, unadulterated and awe-inspiring in its beauty.

Fantasia also announced part of it line-up. The Asian movie to be presented in 2014 includes:

GIOVANNI’S ISLAND
Japan Dir: Mizuho Nishikubo
A gracefully executed anime from Production I.G, examining the struggles of the Japanese in the immediate aftermath of World War II, from the perspective of a child. As beautiful as it is devastating, GIOVANNI’S ISLAND received a Jury Mention at the prestigious Annecy International Animation Film Festival. Canadian Premiere

THE HUNTRESSES
South Korea Dir: Park Jae-hyun
A trio of daring and dangerous bounty-hunting beauties find themselves in a high-risk, high-stakes game of subterfuge and swordplay in medieval Korea. A rousing and fast-paced action-adventure with a dash of romance and a barge-load of slapstick laughs! International Premiere

KILLERS
Indonesia/Japan Dir: The Mo Brothers
Two serial killers. One likes to kill, the other seeks justice. The problem is, the first one is mentoring the latter… Social media will bring a storm of blood over both Tokyo and Jakarta in this shocking yet incredibly smart horror thriller in the vein of THE CHASER and COLD FISH that floored audiences at Sundance. Canadian Premiere

MISS GRANNY
South Korea Dir: Hwang Dong-hyeuk
74-year-old grandmother Oh Mal-soon has been magically transported into the body of her 20-year-old self. Seizing the opportunity to relive a youth she sacrificed in the name of her child, she sets out to explore a world of new possibilities. And it includes K-Pop… Canadian Premiere

ONCE UPON A TIME IN SHANGHAI
Hong Kong Dir: Wong Ching-Po
Opium and kung fu! The glory days of old Shanghai — or are they? Two generations of true kung fu experts collide in the spectacular martial arts feast, with breathtaking choreography by Yuen Woo-Ping and Yuen Cheung-Yan! Canadian Premiere

PUZZLE
Japan Dir: Eisuke Naito
The staff and students at Noriaki Hill High School have been given a game to play, one in which mistakes can be fatal. A giddy, gory brain-twister of a teen survival thriller, in which vengeance is as much a first step as a final solution. North American Premiere

SWEET POOLSIDE
Japan Dir: Daigo Matsui
Two swim-team members, a hairless boy and a hirsute girl, discover the pangs and tangles of first love in SWEET POOLSIDE, one of the most astute examination of adolescence to screen in a long time. North American Premiere

The Fantasia International Film Festival takes place in Montreal July 17 – August 5, 2014. For this year’s edition and onwards, Fantasia will be returning to the freshly renovated Concordia Hall Cinema as its main base, which now features an even larger screen, new seating and upgraded projection and sound.

The festival’s full lineup of screenings and events will be announced on July 10.

The full press release can be found here. You can also find more information on the festival website. 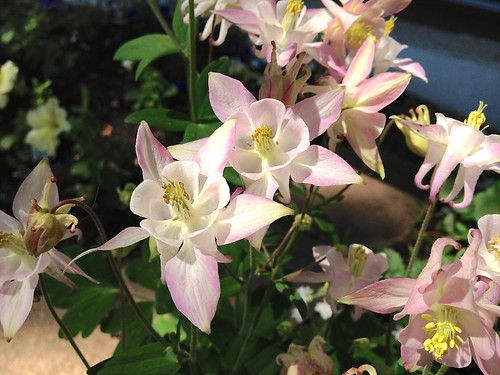 I had to deal with a lot of anxiety in May. I couldn’t take it anymore at my job (I liked the team, the place, the job itself, but the long commuting hours and unruly teenagers where making my life impossible). I was on the verge of depression and needed to do something. However, the prospect of a new workplace (slightly closer from home, quieter) was also a source of apprehension. Was I making the right decision (I am still not sure) ? All this was translating into various body pains (back, chest, jaw, digestion problems, general discomfort, etc.).

Also we’ve been in the new house for over two years now and did very little work, so I really needed to get going with the repairs and improvements. I took two weeks off toward the end of the month for that purpose. First I wanted to repair and paint the garage door, but simply replacing the broken door-opener revealed quite a saga (the installation guy had to come THREE times and I had to hire an electrician to move a light fixture and install an electrical outlet).

As usual I started my vacations with a cold, watch too much TV and ended up doing only half of what I planned (the weather was not so bad, but I spent lots of time waiting for the workmen). I wrote only one manga comment (Joséphine Impératrice, vol. 1). No time left to visit museums with my wife and it was raining on the day we were planning to go to the botanical garden. But at least I finished the garage door and got the ball rolling with the house repairs… However, I better get going because there is still a lot to do for the remaining part of the summer!

Not much happened on the world stage (or was I too busy to notice anything ?). I got mostly interested with Apple WWDC keynote. The announcement was very promising, but also quite disappointing as they announced only software products (OS X 10.10 Yosemite and iOS 8, both due in fall) and absolutely NO hardware (I was expecting to see updates for the iPhone, Mac-Mini and AppleTV). But it was to be expected at a developers’ conference. While reading online I nevertheless gathered over a hundred news links that you’ll find just after the jump: