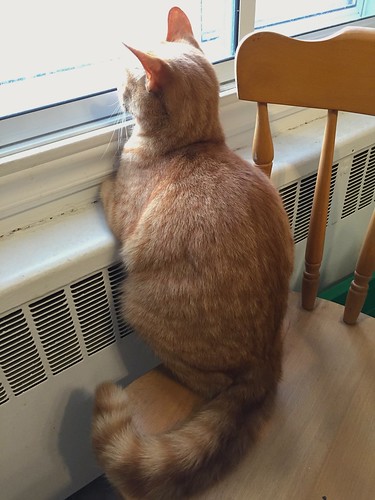 
I must say that work kept me quite tired, so I often felt like just crashing on the couch and watching TV once I was back home. That’s why I watch too much TV (I’ll cover that in a separate post later). I usually have no energy left to read or write. Therefore time went by rather quickly.

I must admit that any work that always makes you tired and leaves you sweating should not be considered white collar work. It has nothing to do with working at a desk or a service counter like it should be: because of the lack of staff I feel like I’m running all the time (I once said it was like running a marathon while learning to juggle) and I spend more time than I should moving boxes, furnitures, and climbing ladders to install decorations, signs or posters. And people say that city workers are overpaid, lazy do-nothing?!

Everyone talks about austerity! Even the mayor said that he wants us working more and will attempt to reduce our benefits, freeze our salary (considering the constant rise of the cost of living it equals to lowering our salary!) and the government also wants to cut our retirement! We have now been without a contract for three years and have been on strike for one day only in early December. I don’t feel like fighting, but unfortunately it’s going that way. It is really frustrating! I have mixed feeling in regard to working with the public (many are nice but some are looking down on city workers or downright insulting) but I love working with books (even the heavy ones). However, this year, I’ll be looking into getting out of this nut house for sure! In the meantimes, there are only seven-hundred-fifty weeks before retirement!

Fall felt a little colder than usual. By mid-November we had our first snow on the ground, but just a little. We kept getting a daily dose of light snow but without any real accumulation, unlike upper state NY which got two meters of snow in three days! Lucky them… The last week of November we saw the return of mild weather as the temperature kept rising slowly: first 5’C, then 8′ up until 13′! With some rain of course! It seemed like a proper Indian Summer, only a wet one and without the romantic sunsets… In December, temperature fell back under the freezing point. It seems clear now that we will have a winter with seesaw weather! The second week of December brought us a real snow storm. A nice thirty centimetres blanket of snow finally brought us the Holidays spirit. But it didn’t last for long. Just before Christmas it warmed up around 5’C and it started raining on Christmas Eve. It rained all night, sometimes quite heavily. The wind caused some flicker in the power grid. It really didn’t feel like the Holidays. At the end of December, the temperature went back to its seasonal frigid self, but it stayed dry. Fortunately, New Year brought some light snow again which gave back a wintry look to the landscape…

All this time I kept being preoccupied with my health. However, I got tired of logging the calories (since I am not the one preparing food it got complicated to identify and quantify properly what I was eating). Also, the changing weather (from freezing to raining and back) made it difficult to take long walks outside, but so far I haven’t faltered on this aspect. I keep taking strolls on my days off (sometimes a little shorter because of the temperature, so it is sometimes difficult to reach my goal of 8000 steps per day) which also give me the opportunity to take many nice nature pictures around the park (see the many sunsets and snowy landscapes — as well as cats — on my iphoneography feed). I have yet to find meaningful physical activities that I can perform indoor (I do have an old stationary bike, but it’s clunky and uncomfortable). The effort somehow paid off since I succeeded to lose a couple of pounds, but I since then regained them (it’s particularly difficult during the Holidays). As my weight oscillates between 206 and 202 pounds, it seems like a losing and desperate battle. I failed to reach below two-hundred pounds before the end of the year, but I swear I’ll keep at it!

Beside the fact that the constant pressure at work keeps me tired, I feel in relatively good shape. A little before Christmas I had a cold, but it didn’t last long (thankfully I got the flu shot again this year). I also fell from an old two-step ladder at work, which caused many body pains. This, and the constant kneeling at work, prevented my left knee from healing so it’s still hurting when I am bending it or putting pressure on it. I should have it looked after since I don’t want to end up with mobility problem several years later. There is always little problems (like recurring pimples – the Hokuto no ken pox!) and pains (particularly in the back), but that’s the toll of aging, I guess.

Also, while reading a post on a social network, I recently realized that I was suffering from mild social anxiety. I always thought I was a little shy, rather misanthrope, uncomfortable in any social setting, particularly in crowds, and sometime a little paranoid, but maybe it could all be summed up by this. Who knows. That’s the total opposite of my father who was always at ease with people…

Somehow the need I felt to monitor my health with all sort of gadgets and apps brought a renewed interest in domotic (in the old days we were talking about home automation but now people talk more about the “internet of things”) and the purchase of more gadgets and apps (so-called “intelligent” thermostat, smoke detector, light control, etc). I’ll talk about this a little more in a separate post, but there’s this funny anecdote: The Nest thermostat is supposed to save energy by adapting to our habits and analyse our usage. I had already established a schedule determining which temperature I wanted for each hour of the day (usually at 19’C, 16′ when I was away, 18′ at night, etc). However, a few mornings, detecting that I was up either via its motion detector or its link to my Jambone UP24 band, the Nest took the odd decision to crank up the heat to 22′. After a while it leaned that it wasn’t what I wanted and it stopped, but still… Maybe I should call it HAL (Heating Auto-Learner) or is it too creepy? Even the body of the thermostat itself looks like the “eye” of HAL 9000, the crazy computer in 2001: A Space Odyssey. Coincidence? I just hope it won’t start calling me Dave!

Another annoying anecdote: I decided to update the Windows version that works with the VMware Fusion PC emulator I am using sometime and I purchased a licence for Windows 8.1. How come it takes only a couple of hours (and it’s free) to install and tweak OS X (10.10 Yosemite for example) while it costs me nearly $150 and twelve hours to do the same thing with Windows?! I really don’t understand why people would go to such trouble for that piece of… software… Unfortunately there are still too many programmes and games that run only on it…

This blog did well this year. Actually, after about nine-hundred posts, it is my tenth year of blogging. And I increased my average by succeeding to publish two-hundred posts this year! Can I do more next year? I’ll surely try. This blog has an overall page views count of 107,300! This year, almost every month were above 2000 page views (save for April which was a little less) with a monthly average of 3000 pv. In a strange fluke, according to Google stats, December had nearly 10,000 pv (which seems to come mostly from traffic to last year’s review of the Japanese movie The Devil’s path). If we disregard December, the 2014 monthly average is only 2400 pv, nevertheless a serious increase over the all-time average of 1601 pv. However, according to StatCounter, December had only 1380 page views (or 1118 unique visits). Strange discrepancy. StatCounter also shows a yearly total of 11,181 pv (or 7,083 uv) which is, still, quite above the seven-year average of 7,702 pv (5238 uv) or a monthly average of 932 pv (591 uv) again an increase over the all-time monthly average of 771 pv (524 uv). Indeed, not bad at all. So, feel free to keep reading (and please leave some comments from time to time!).

Finally, I must say that, over all, this year was relatively good… if I forget about the unpleasantness of work (anyway we work to pay the bills not to have fun) and the fact that I was briefly hospitalized. I don’t have much to complain about and I am mostly happy. I did lots of work on the house, wrote a little more about manga and life (of course, in both case, not as much as I wanted but that’s a beginning). So, for 2015, I sincerely wish to watch a little less TV, continue to work on the house, read more books and write more about them and everything else.

Take care and Happy New Year to you all.