A couple of years ago I’ve talked about my collection of ancient books. Well, I just made a new acquisition. I never thought I would find more interesting (but affordable) books to add to this collection…

This week-end I went to the Westmount Book Fair at the Green Center in Westmount. I’ve been hearing about this bi-annual antiquarian book fairs for a while and always wanted to have a look but was always too busy. When I saw another one advertised on facebook, I thought now was the time. Although I was rather apprehensive that I would find a very interesting (and expensive) book.

The Westmount Book Fair was organized by Wilfrid M. de Freitas, who is himself a bookseller. It was the 27th edition of what is advertised as “the smallest ancient books fair in Canada, where booksellers from Quebec and Canada will help you discover a wide selection of books, brochures, maps, printed matter and small papers”. It was indeed a small venue with a little more than a dozen stands.

I took a quick look and identified all the books the would interest me and fit into my unfortunately small budget: the Caesar commentaries (in French, 1763, $125), the work of Tacitus (2 vols in latin, 1772, $350), and the work of Valerius Maximus (1659, $275). More affordable but out of my subjects of interest for this type of books (ancient authors, 16th to 18th century editions) there was also a Short French Dictionary (in English, 1701, only $100). There was also a big format velum book (about 25 cm hight and 8 cm thick) from the 17th century about mythology (a mere $5000 !), the works of Bossuet in a big volume ($4500), a few sheets from German old books (incunable?) or a large format book (in-folio) about the myth of the wandering jew illustrated by Gustave Doré for which I didn’t even dare looking for the price tag. Out of interest and price range, I also noticed the first annual compilation of the bande-dessinée magazine Pilote ($500-$700). It gave me a few interesting books to choose from. After, deliberating over the interest (age, condition of the binding, subject) and the price, I finally chose the Valerius Maximus. It was the only 17th century edition in my list, in relatively good condition and at an affordable price. It was sold by Mr. de Freitas and he even gave me a small discount.

The title of the book (which doesn’t appear on the first page) is “Factotum ac dictorum memorabilium libri IX” [nine books of memorable deeds and sayings]. The binding (pork skin?) includes two volumes (it’s 4.5 cm thick), in the sextodecimo format (in-16, in this case 8 x 12.75 cm) . According to the note from Mr. de Freitas, it’s the second edition in French, translated by Jean Claveret. It is a collections of a thousand historical anecdotes, many lifted from earlier Roman writers, re-drafted by Valerius Maximus as moral and social models. It was written during the reign of Tiberius (around around CE 30 or 31). It is quite interesting…

The Collection (or my cabinet of curiosities) 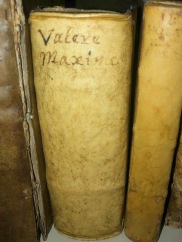 The next book fair, organized by the Confrérie de la Libraries Ancienne du Québec, will be the 36th Antiquarian Book Fair held at the Concordia University (Pavillon McConnell, 1400 bout Maisonneuve O.) Saturday September 28th (from 12:00 to 18:00) and Sunday September 29th (from 11:00 to 17:00). 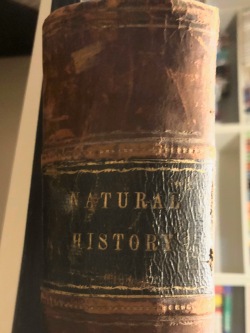 While having my nose in old books, I decided to do some more research on one of my (very interesting) books on which I have little information. It’s an octavo volume (15 x 24 x 5 cm) titled Natural History. It has a cardboard cover, covered with brown cloth and thin leather. It doesn’t have a title page and the only publisher information appear on the very last page: “WILLIAM MILNER, PRINTER, CHEAPSIDE, HALIFAX.” I first thought it was printed in the maritime provinces in mid-19th century (I think my father purchased it in Gaspésie in the 60s, for $35). It has 730 pages and is in average condition (yellowed pages and several stains, little tears in the cloth of the cover). 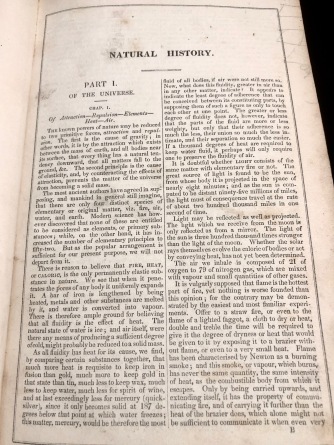 It seems inspired by Pliny’s Naturalis Historiae, but it is not its translation as it has a different content organization and covers more modern subjects: Part I : Of the Universe, Part II-XXII: Animals (mostly mammals), Part XXIII: Unclassified Animals, Part XXIV-XXX: Birds; then A History of the Fishes in General (including cetaceous, crustaceous, frogs, lizards, serpents, turtles, and insects !) Part I-XII.

With a closer examination and more research, I discovered new information about this book. First, it seems that the printer is NOT from Nova Scotia but rather from England. Cheapside is a street in Halifax, West Yorkshire, England. William Milner (1803-1850) is a printer who was known for publishing lots of cheap books (selling for sixpence (2 pence) and a shilling (5 pence)). He apprenticed as a printer, but started publishing his own books, first with local printers and then setting up his own press in the 1830s (or in 1844). After his death, his stepsons took over the business under the name Milner & Sowerby. Therefore, my books must have been published between the 1830s and 1850. I will try to find more about this publisher. There is a book that seems to list some of his production, so I will probably start there. To be continued…