My wife read an interview of Waki Yamato in Fujin Kōron (a Japanese women’s public opinion magazine) where she was talking about a recent anime adaption of her manga Haikara-san. My wife, who enjoyed the manga when she was a teenager, told me she would like to see this animation. Therefore I obliged.

Excerpt from the manga (from Frederik L. Schodt Manga! Manga! The World of Japanese Comics, p. 90).

Haikara-San: Here Comes Miss Modern (はいからさんが通る / Haikara-san ga tōru) is one of those shōjo manga published in the 70s that I wish would be one day translated either in French or English so I could read them. This traditional shōjo style might not be very popular amongst today’s manga reader, but it was beautiful in many ways and their stories were always quite compelling. The manga was serialized in Shōjo Friend between 1975 and 1977 and compiled into 8 volumes by Kodansha. The manga was first adapted into an animated TV series (TV Asahi, 42 eps, 1978-1979), then into several live-action TV movies (on KTV in 1979, on Fuji TV in 1985, by Toei in 1987, and on TBS in 2002) and was even the subject of a Takarazuka revue in 2017. Finally, it was adapted into two anime movies: Gekijōban Haikara-san ga Tōru Zenpen – Benio, Hana no 17-sai  [劇場版 はいからさんが通る 前編 ～紅緒、花の17歳～ / lit. “Theatrical version, Here comes miss modern, first part: Benio, 17 years’ flower”] (November 2017, 97 mins, already available on Blu-ray from The Right Stuf) and Gekijōban Haikara-san ga Tōru Kōhen – Tokyo Dai Roman [劇場版 はいからさんが通る 後編 ～花の東京大ロマン～ / lit. “Theatrical version, Here comes miss modern, second part: Tokyo great romance of flower”] (October 2018, 105 mins).

[ ¡ WARNING: The following MAY contain traces of spoilers! People allergic to the discussion of any plot’s elements before seeing/reading the story themselves are strongly advised to take the necessary precautions for their safety and should avoid reading further ! ] 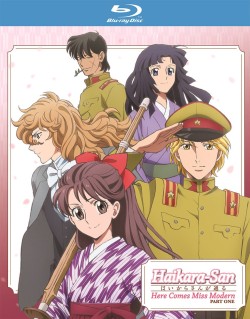 In the first movie, we follow the life of 17-year-old Benio Hanamura who was raised by her military father. She is a tomboy who likes to practise kendo with the girly neighbour Ranmaru (who was raised to become a kabuki actor). The story is set in the Taishō era, when Japan is trying to “occidentalize” itself. She wants to be “modern” and believes in a woman’s right to have a career and to marry for love. Unfortunately, her father want to arrange a marriage with one of his young subordinate, lieutenant Shinobu Ijuin, because their grand-parents were in love but could never marry and made the pact that the Hanamura and Ijuin families would be one day reunited. Benio refuses and tries to elope with Ranmaru, who is secretly in love with her. She also discovers that her best friend Tamaki is in love with Shinobu. She is nevertheless sent to Shinobu’s household to help and learn the domestic duties of a wife. As she is finally falling in love with him, she infuriates her father’s superior and Shinobu is sent to the front in Siberia. Not long after, he is reported missing in action or maybe dead…

The movie was written and directed by Kazuhiro Furuhashi, with character designs by Terumi Nishii, art direction by Kentaro Akiyama and music by Michiru Oshima. The cast includes Mamoru Miyano as Shinobu, Saori Hayami as Benio, Asami Seto as Tamaki, Yuuki Kaji as Ranmaru, and Unshō Ishizuka as Major Hanamura.

In the second movie, Benio tries to go on with her life and hopes that Shinobu might come back one day. In the meantime, she keeps taking care of his grandparents household and tries to find a job. After many unsuccessful attempts she is finally hired as reporter by a small newspaper headed by Tosei, a handsome but misogynistic editor (he’s literally allergic to women due to issues with his mother). She goes to Manchuria to investigate a band of rebels supposedly headed by a Japanese deserter. She meets with him and discovers he is Onijima, a friend of Shinobu in the army, who tells her how Shinobu got missing after saving his life. Later, back in Tokyo, she is covering the visit of a Russian noble couple in exile, Count Michaellov and countess Larisa. Benio is shocked to see that the count looks exactly like Shinobu. Actually, it’s him but he suffers from amnesia. Larisa saved and nursed him to replace her dead husband Sasha (who was in fact Shinobu’s younger half-brother, because Shinobu’s German mother left to marry a Russian noble—yes, I know, it’s complicated). When Shinobu eventually recovers his memory, he cannot marry Benio because he is now married to Larisa and feels indebted to her as she is dying of tuberculosis. Heartbroken, Benio decides to marry Tosei instead (who has discovered that he actually loves her). But on their wedding day the great Kanto earthquake occurs and Larisa finally dies of her disease. Benio and Shinobu can finally be reunited…

The second movie was directed by Toshiaki Kidokoro, with a script by Kazuhiro Furuhashi, character designs by Terumi Nishii, art direction by Kentaro Akiyama and music by Michiru Oshima. The cast includes, besides the cast from the first movie, Kazuya Nakai as Shingo Onijima, Maaya Sakamoto as Larisa, and Takahiro Sakurai as Tōsei Aoe.

Haikara-San movies are beautifully animated, with crisp, up-to-date quality animation (quite different from the style of late-70s anime, which tend not to age very well—although the TV series is now also available on blu-ray in Japan). The story offers typical Japanese romantic drama filled with lots of comedy. However, despite the funny antics of the characters, the story tackles very serious subjects like feminism and war. I enjoyed it a lot and I highly recommend you to, at least, have a look. If only someone would translated the manga… 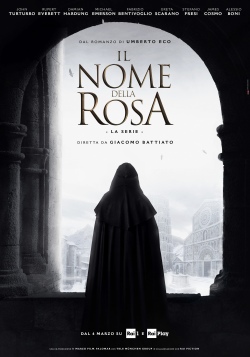 I stumbled by chance upon this TV series adaptation of the Umberto Eco famous novel (I thought I had read it, but, since I cannot remember anything about it, now I have doubt). I had seen, a long time ago, the movie adaptation with Sean Connery (and I have re-watched it just after seeing the series just for the fun of it!) and I was quite curious to see what it would look like as an eight-episode series (over six hours!)…

The story is set in 1327. Brother William of Baskerville (an English Franciscan, whose name alludes both to Sherlock Holmes and William of Ockham), followed by the young novice Adso of Melk (the son of a German Lord), reaches an isolated Benedictine abbey in the Alps to participate in a debate between the Franciscan Order and the Avignon papacy about whether the Church should be poor as Christ was—a debate that would determine the very survival of the Franciscan Order. Upon arrival at the abbey the two find themselves caught up in a chain of mysterious deaths. William, a medieval sleuth, must untangle this knot of suspects (any of the multiple factions in the abbey, including a group of Heretics hiding amongst the Benedictines)—before the Dominican papal Inquisitor Bernardo Gui burn anyone at the stake—in order to solve the mystery that seems linked to the fabulous Abbey’s library and a coveted rare book!

While the movie focuses on the heart of the mystery (the murders and the book), the TV series has ample time to develop around the multiple elements that the movie left out: how William and Adso met, who are the Dulcinian heretics, the Inquisition’s past of William, the particular and what’s at stake in the debate between the papacy and the Franciscan, who is the peasant girl that Adso meets and falls in love with.

Although I liked the movie a lot because of its multiple charms and its great photography, the TV series is a very good production that seems more faithful to the book — and it offers more plot and action. It is a beautiful, very interesting historical drama (I can only dream of all those old books!) which will hopefully soon stream online (possibly on Amazon Prime) so it will be more readily available. I enjoy it and recommend it to all aficionados of medieval history, rare books and mystery novels.

To learn more about this title you can consult the following web sites: