“While walking home from work one evening, Jeff Manning is struck by a car and killed. Not one but two women fall to pieces at the news: his wife, Claire, and his co-worker Tish. Reeling from her loss, Claire must comfort her grieving son and contend with funeral arrangements, well-meaning family members and the arrival of Jeff’s estranged brother — her ex-boyfriend — Tim.

With Tish’s co-workers in the dark about her connection to Jeff outside the workplace, she volunteers to attend the funeral on the company’s behalf, but only she knows the true risk of inserting herself into the wreckage of Jeff’s life. Told through the three voices of Jeff, Tish and Claire, Hidden explores the complexity of relationships, our personal choices and the responsibilities we have to the ones we love.”

[Text from the publisher’s website; see also the back cover]

My wife is a member of the Montreal’s Sherlock Holmes fan club, called The Bimetallic Question. Every year in January they are holding a formal dinner to celebrate his birthday. They always have a special guest speaker to talk about his/her work and share thoughts about a Sherlockian topic. It is usually a local writer or a Gazette columnist. Last year it was Montreal mystery writer Christopher Huang (I read and commented his book A Gentleman’s murder on this blog). This year on January 18th, being available, I decided to come with my wife to this “Master’s Birthday” dinner to meet this colourful crowd I was hearing so much about but mostly to listen to the guest speaker, writer Catherine McKenzie [ Biblio • FB • Goodreads • Google • Web ]. 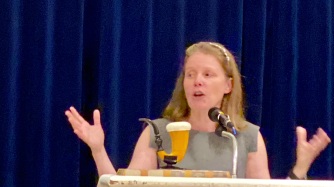 A brief sample of McKenzie presentation

I chose to read Hidden by chance, selecting it among the titles available at the library (as I couldn’t get her latest title on time to start reading it before her guest appearance at the dinner). Because McKenzie was invited to speak at the club dinner, I assumed that she was a mystery or crime writer, but Hidden is neither. McKenzie started her career writing Women’s fiction (sometimes called Chick-lit). With Hidden (and later with Fractured and The good liar) she moved into Psychological fiction with a slight touch of a thriller. Although her characters often move in the legal world (law firms and courts), she starts putting elements of crime fiction into her writing only with I’ll never tell and You can’t catch me.

Hidden is very well written. It offers a compelling story about grief and adultery that knows how to keep the interest of the reader. Her characters sound quite true, so when the storytelling builds up with tension you really feel for them. She even manage a little twist at the end. I enjoyed reading this novel but couldn’t avoid being annoyed by the narration at the first person, done by three different characters — including the guy who died at the beginning of the novel! That’s rather unusual. I would have preferred that she put the name of the narrating character in the title of each chapter (I’ve seen this in other books). That way it would not have taken me a few pages into each new chapter before figuring out who the narrator was this time…

I also noticed that she “lied” in her presentation at the club. When asked if she based her characters on herself she said categorically “no”, arguing that when editors say “write about what you know“ it is a misconception that authors write about themselves. In the contrary, my experience in the literary world tells me that writers (consciously or not) always put a part of themselves into some of their characters. McKenzie characters are often working in the legal world so she clearly uses part of “what she knows” (her own experience as a woman, as a mother, as a lawyer) to create the setting of her fictions. In Hidden (p. 303), Jeff accused Tish of having lied about her golf handicap but she answers that she told him about her bad putting when they first met, adding “I have perfect recall of conversations.” McKenzie used this exact sentence, verbatim, during her presentation as she was explaining that she was sometimes using in her books real conversations she had had or had heard. I rest my case.

Hidden was a very good reading. I enjoyed it greatly. It’s nice sometimes to read a simple book about the complex life of everyday people. I’ll certainly try to read more of Catherine McKenzie’s work.