“Ghost in the Shell: Stand Alone Complex takes place in the year 2030, in the fictional Japanese city of New Port. The story follows the members of Public Security Section 9, a special-operations task-force made up of former military officers and police detectives. The manga presents individual cases that Section 9 investigates, along with an ongoing, more serious investigation into the serial killer and hacker known only as “The Laughing Man.”” 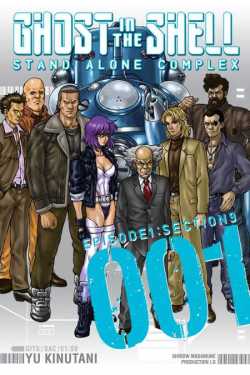 “Volume 1: No mission too dangerous. No case too cold. When a high-ranking government official is kidnapped, the Prime Minister must call in his top crime fighting force known as Section 9. Led by the beautiful (and deadly) Major Kusanagi, the cybernetically enhanced squad must use all their skill to take down the kidnappers and rescue the hostages. But that’s only half of the mission; can Kusanagi and company find out who’s behind the kidnapping, and, more importantly, just what they’re after? Find out in this thrilling first volume of The Ghost in the Shell: Stand Alone Complex!” 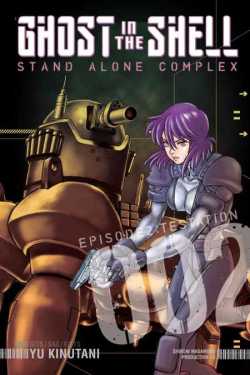 “Volume 2: The best offense is a strong defence? An advanced tech tank is on the loose and appears hell bent on heading into the city. To make matters worse, it has impenetrable defenses and all conventional efforts to stop its progress have failed. Now it’s up to Major Kusanagi and Section 9 to find a way to stop the tank’s inexorable march toward an unknown fate in the city!” 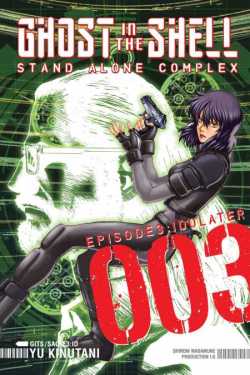 “Volume 3: Identifying the enigmatic hero. Marcelo Jarti, the hero of a democratic revolution, and South American drug dealer, has been coming to Japan periodically and no one knows why. The Major and Section 9 track his movements after he makes his latest appearance in the country. They are determined to figure out the meaning of his visits, but following Jarti leads to more than they could have possibly expected …” 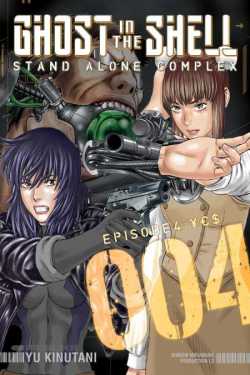 “Volume 4: The power of misdirection. Section 9 receives a tip that a criminal group from Henan is planning on attacking a financial institution. To prevent the attack, Section 9 infiltrates the secret base of the criminals. The mission goes well and the threat is neutralized … or is it? Something is amiss, and Major Kusanagi and Section 9 must act quickly in order to stop the criminals from achieving their true goal.” 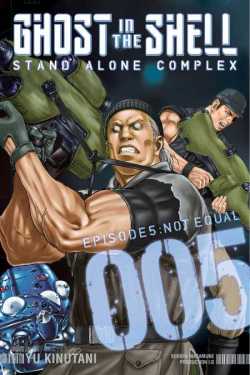 “Volume 5: Ageless new world. 16 years ago a terrorist group called the “New World Brigade” kidnapped a young girl named Eka Tokura. However, recent photos of Eka have surfaced and she appears to look exactly as she did 16 years ago. To investigate this mystery, the special unit of the Maritime Safety Agency was dispatched to a man-made island off the coast of Okinawa that has been seized by the Brigade. However, communication with the special unit has been lost, leaving this island and the Brigade in a shroud of secrets. Section 9 is tasked with the job of finding out what happened on this man-made island and discovering the truth behind Eka’s age-defying looks.” 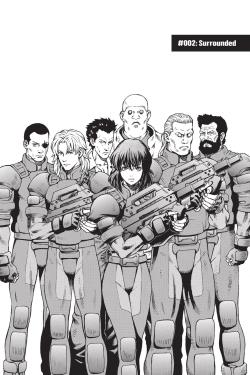 I have already introduced the Ghost in the shell story created by Masamune Shirow when I talked about the live-action adaptation and the book 1.5 of the manga. However, my favourite part of GITS franchise was the anime TV series Stand Alone Complex. It is a police story with lots of human drama set in a post-cyberpunk environment. The TV series format allowed to make a great deal of character development for all the protagonists, the members of Section 9 Public Security unit. Usually, an anime is based on a manga but exceptionally, in this case, it is the opposite: the anime TV series came first (in 2002-2005) and this manga is a VERY faithful adaptation of a selection of five episodes (out of the fifty-two episodes of the TV series).

The seinen manga of Ghost in the shell: Stand Alone Complex (攻殻機動隊 Stand Alone Complex / Koukaku Kidoutai S.A.C.) was first serialized in Weekly Young Magazine (December 2009 – March 2010) and then in Gekkan [monthly] Young Magazine (April 2010 – December 2012) before being compiled in five volumes by Kodansha. It was translated in English by Kodansha Comics (2011-14) and in French by Glénat (2013-14). The English version is also available in digital format at ComiXology.

I like Ghost in the shell in general because it is a great cyberpunk story: people can get cyber-enhancements, the internet (the “network”) is everything, everywhere and can be used in unimaginable ways. The story also has strong social and political aspects, as it give a glimpse of a fascinating techno-dystopian future (which seems popular in Japan). In this context the “ghost” refer to the aspect of the mind that makes it unique and self-aware (the soul) even when it is digitized and uploaded to a cyber-brain or to the net, the “shell” is the body (biological or cybernetic) and the “standalones” are those who “remain outside the system” (not cyber-enhanced? air-gapped?). 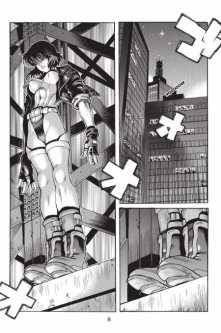 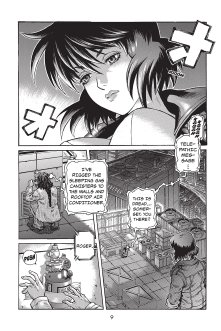 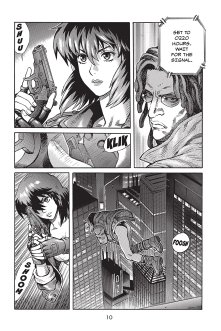 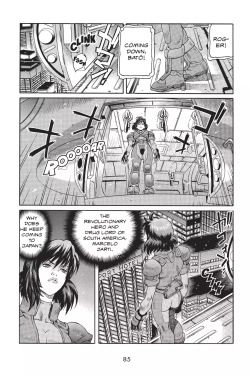 However, I prefer the Stand Alone Complex series (both anime and manga) because I feel it offers the best designs (mostly of the characters) and storytelling (its TV series format allows for more development of both the characters and storyline). The anime movie (directed by Mamoru Oshii) was awesome but really too philosophical. By side-stepping the “puppet master” story arc, SAC is able to tell more stories of the most interesting character, Major Motoko Kusanagi, and to develop her background story in a very interesting way. Similarly, the orignal manga by Masamune Shirow is superb but the art is too detailed and the story too complex to be easily enjoyed. Shirow’s art also lacks consistency, looking sometimes very serious and sometimes (to be humorous) quite caricatural. With this new manga by Yu Kinutani the art is cleaner, more serious and steady while still being detailed enough. It is therefore much more enjoyable. The storytelling and layout follow closely the TV series (often even adding more scenes to make the action easier to follow in a static medium) so it almost feels like a storyboard.

Each volume of the manga series is adapting one episode of the TV anime. Volume one retell the story from episode 1 “Section 9”, vol. 2 covers the episode 2 “Testation”, vol. 3 recount the episode 7 “Idolater”, vol. 4 is about the episode 14 “¥€$” and vol. 5 give us its take on the episode 13 “Not Equal”. Volumes 1 and 4 also include three bonus short stories from the “Tachikoma Days” manga by Masayuki Yamamoto. Those are funny episodes involving the multi-legged artificial intelligence tanks (think tanks) called the Tachikoma — echoing the capsule video at the end of each episode of the TV series. 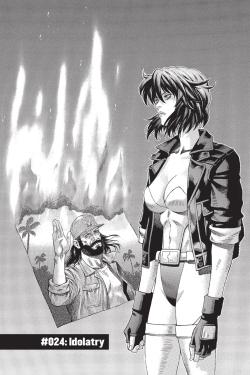 One annoying thing from Ghost in the shell (mostly for feminists and people unfamiliar with the franchise) is the way the Major is dressing: in a very provocative and sexy way. This is part fan service, of course, but the character has also a reason to do so. A full-cyber body (even if it has a generous feminine shape) feels and looks a bit cold and asexual, therefore the Major wears very alluring clothing to claim and express her femininity.  I imagine she might think something like “with a body like this it’s better to show it” or maybe, feeling a little like a doll, she wants to dress like one. It also offers an element of surprise: nobody expects someone looking like her to be so strong and kick-ass!

Finally, my greatest disappointment about the GITS Stand Alone Complex manga series is that there are only five volumes. I guess it would have taken too much work and time to adapt all fifty-two episodes of the TV series. It is just too bad. However, if you want more, you still have the TV series — which was also complemented by three novels (available from Dark Horse), two OVA (The Laughing Man, Individual Eleven) and a movie (GITS: SAC – Solid State Society)…

I am already a big fan of GITS and of cyberpunk stories, but I particularly like this manga series because it offers strong designs and art, excellent storytelling and constitute an easy read. It is quite enjoyable if you like investigative stories with lots of action (sometime quite violent), rich socio-political themes and that are set in a cyberpunk future. I must admit that it has been a long time since I took so much pleasure in the reading a manga. I highly recommend it.