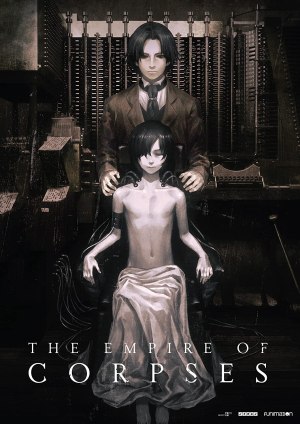 “From the studio that produced Attack on Titan comes a captivating historical action thriller based on an award-winning novel by Project Itoh. In an alternate version of 19th century London, the world has been revolutionized by “corpse reanimation technology” creating armies of undead who serve the living as laborers across the globe.

In an attempt to revive his dearly departed friend, young medical student John Watson becomes obsessed with replicating the work of Dr. Victor Frankenstein—the legendary corpse engineer whose research produced the only re-animated corpse to possess a soul. But when his illegal experiments put him at odds with the British government, Watson is drafted into a worldwide race to find the lost research notes of Victor Frankenstein before the secrets of the human soul fall into the wrong hands.”  [Text from Funimation website]

This anime movie is based on a novel by Itō Satoshi (left unfinished after his death it was completed by his friend Enjō Tō) published in August 2012 by Kawade Shobo Shinsha. It was also adapted into a manga by Tomoyuki Hino (I have recently commented on it).

In 1878, young Doctor Watson illegally resurrects his dear friend Friday. When caught he is sent by M, the head of the British secret service, on a mission to Afghanistan via India. With the help of Frederick Burnaby and Nikolai Krasotkin, he must recover the Notes of Victor Frankenstein which have been found by Alexei  Karamazov. Until now, corpse technology can reanimate people only as soulless zombie apt to perform only basic menial tasks. However Frankenstein was able to produce a corpse with a soul, free-will and speech — known as “The One”. His Notes would allow to tremendously improve corpse technology and are coveted by all the great powers of the world.

He finds Karamazov and discovers with horror that his new technique to improve corpses rely on live subjects ! He also learns that Karamazov is no longer in possession of Victor’s Notes as he left them in Japan. One year later, Watson, Friday and Burnaby are in Tokyo and, with the help of Seigo Yamazawa, break into Osato Chemicals (Friday hacks into the security system!). Unfortunately, they are too late, “The One” is already there and, after a fierce battle, escapes with his creator’s Notes. The team is again saved by Ulysses Grant and Hadaly who bring them to the United States on the steamship USS Richmond.

However, “The One” arrives in San Francisco first and takes over the Paul Bunyan, a super-computer working on steam and electricity. Using ultra-sound, he sends a wireless command to all corpses, turning them into berserks who attack people (typical zombies like in The Walking Dead). This also affects Friday, who needs to be sedated. “The One” is finally captured by M who transports him to the Tower of London. So far, the storytelling has been quite excellent. Unfortunately, from that point, the story gets muddled and confusing…

Hadaly has her own agenda. Like Watson, who wants to give a soul to Friday, she is seeking a soul for herself — as she is revealed to be a mechanical automaton created by Thomas Edison. With her help, the team leave for London aboard the submarine Nautilus. They crashes the Tower Traitor’s Gate to discover that M has nefarious intents. After analyzing the Notes, he uses the Babbage analytical engine and Victor’s brain to send another wireless code that transform Britain’s corpses into berserks but also takes control of the humans! His motivation for doing that are not very clear: he wants to bring peace to the world (?!)…

However, “The One” escapes and kills M. As he plays music on a giant organ, he takes control of the Babbage engine. He is motivated by hatred and revenge against humanity, but also wants to give a soul to Hadaly, who he calls Lilith, to make her into the bride that Frankenstein refused him. He also wants to take over Friday’s body to form the perfect couple. Of course, after a long battle, Watson succeeds to stop him, causing the destruction of the Babbage engine and of the Tower, and restoring to the people their souls and wills. In the end, with the help of Friday, Watson experiments on himself. Then, after very long ending credits, we finds Watson four years later with a new adventure partner named Holmes and Hadaly now goes by the name of Irene Adler!

This anime movie is a superb example of steampunk story — a type of alternate history (or uchronia) set in a more technologically advanced Victorian era. I like the idea to create “necroware” to program the dead (in a way slightly reminiscent of Westworld) using a neural plug, a modified typewriter and punch-cards or Charles Babbage’s Analytical Engine! The retrofuture world that the story depicts looks quite fascinating.

The premisses of the story are also quite innovative. While historical fiction often uses real historical people as characters, this story interestingly uses illustrious fictional characters. If some of the characters have really existed (Ulysses S. Grant, Frederick Burnaby, Thomas Edison), most of them come from the works of Sir Arthur Conan Doyle (Watson, Holmes, Irene Adler, “M” could also possibly be for Moriarty or Mycroft), Ian Fleming (M, MoneyPenny, Osato Chemicals), Fiodor Dostoïevski (Alexei  Karamazov, Nikolai Krasotkin), Mary Shelley (Victor Frankenstein and his creature), Daniel Defoe (Friday from Robinson Crusoe), Jules Verne (the Nautilus submarine), or even Auguste de Villiers de L’Isle-Adam (Hadaly, the android from The Future Eve). This shows a great literary culture from the writer.

For the most part of the movie the storytelling is excellent. Unfortunately, in the end (the last third of the movie), the story gets overly mystical (crystals?) and too many parts of the plot are left without any explanations. The whole part with Alexei Karamazov is not very clear: what are his motivations and end-game? Same thing with “M”: what does he want to accomplish? The conclusion of the story is rather confusing and disappointing. However, the greatest assets of the movie is its really beautiful animation (particularly the background art which is quite superb). The battle scenes are also very well executed.

The animated movie is much better than the manga. It’s more beautiful, the story is better organized and more fluid, the action scenes are easier to understand. I like the Russian exploding corpses — explosions are much more fun when animated! Also (and I rarely say this) the English dubbed version is very good. The movie was less appreciated by the general audience (6.0 on IMDb, 42% on Rotten Tomatoes) than by anime fans (A- on ANN, 7 on MyANimeList). All in all, it is a very good movie, worth watching, particularly if you are a steampunk fan.

To learn more about this title you can consult the following web sites:

Also, you can check the official trailer on Youtube:

2 thoughts on “The empire of corpses (anime)”