Three years ago, in order to celebrate the Black History Month, I commented on the first volume of this biographical comics by John Lewis. And last month, as I was talking about the Congressman death, I urged people to read this series. Then it occurred to me that I should follow my own advice and read volume two and three… 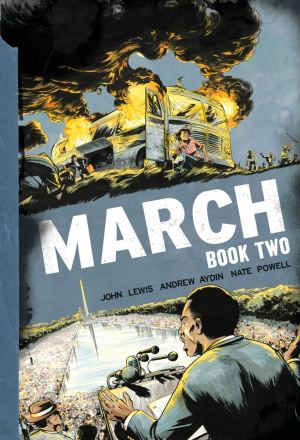 “After the success of the Nashville sit-in campaign, John Lewis is more committed than ever to changing the world through nonviolence — but as he and his fellow Freedom Riders board a bus into the vicious heart of the deep south, they will be tested like never before. Faced with beatings, police brutality, imprisonment, arson, and even murder, the movement’s young activists place their lives on the line while internal conflicts threaten to tear them apart.

But their courage will attract the notice of powerful allies, from Martin Luther King, Jr. to Attorney General Robert F. Kennedy… and once Lewis is elected chairman of the Student Nonviolent Coordinating Committee, this 23-year-old will be thrust into the national spotlight, becoming one of the “Big Six” leaders of the civil rights movement and a central figure in the landmark 1963 March on Washington for Jobs and Freedom.”

[Text from publisher’s website and the inside flap; see also the back cover]

“By the fall of 1963, the Civil Rights Movement has penetrated deep into the American consciousness, and as chairman of the Student Nonviolent Coordinating Committee, John Lewis is guiding the tip of the spear. Through relentless direct action, SNCC continues to force the nation to confront its own blatant injustice, but for every step forward, the danger grows more intense: Jim Crow strikes back through legal tricks, intimidation, violence, and death. The only hope for lasting change is to give voice to the millions of Americans silenced by voter suppression: “One Man, One Vote.”

To carry out their nonviolent revolution, Lewis and an army of young activists launch a series of innovative campaigns, including the Freedom Vote, Mississippi Freedom Summer, and an all-out battle for the soul of the Democratic Party waged live on national television. With these new struggles come new allies, new opponents, and an unpredictable new president who might be both at once. But fractures within the movement are deepening … even as 25-year-old John Lewis prepares to risk everything in a historic showdown high above the Alabama river, in a town called Selma.”

[Text from publisher’s website and the inside flap; see also the back cover]

After introducing John Lewis in Book One and explaining how he cames to be involved in the civil rights movement by joining the Nashville students nonviolent protests against segregation, we see him pushing forward, in Book Two, by participating in the Freedom Riders actions. His determination, despite the increasingly violent response to the movement, bring him to a leadership position as the chairman of the SNCC and to a speaking spot at the landmark March on Washington.

In Book Three, Lewis is involved with the organization of the Mississippi Freedom Summer. College students flock to the South to register as many as possible Black voters. Despite the fact that the Fifteenth Amendment gave the African-Americans the right to vote, they were facing unjust registration suppression (poll taxes and literacy tests). The project goal was to publicize and counteract this injustice, but it was met with great terror and intimidation (including the tragic events recalled in the movie Mississipi Burning). They also created the Mississippi Freedom Democratic Party in order to put delegates at the Democratic National Convention with great controversy. It failed but prompted Lyndon B. Johnson to pass the Civil Rights Act of 1964. The protests, and the violent response from the South authorities, continue to escalate up to the march from Selma to Montgomery (on March 7, 1965) where Lewis led six-hundred marchers across the Edmund Pettus Bridge and was gravely wounded. This event was a turning point that brought national and international attention to the question and prompted Johnson to pass the Voting Rights Act of 1965. Interestingly, through the recounting of his involvement, Lewis doesn’t shy from talking about the dissent within the various civil rights organizations (mainly the SNCC, CORE, NAACP, and SCLC) and even to sometimes criticize the positions of Martin Luther King or Malcom X. 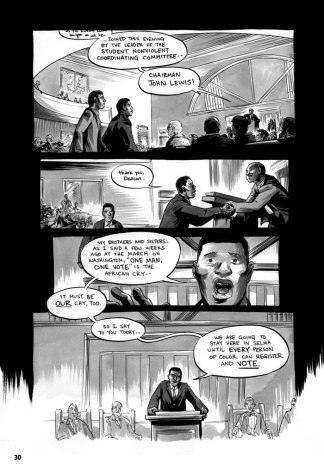 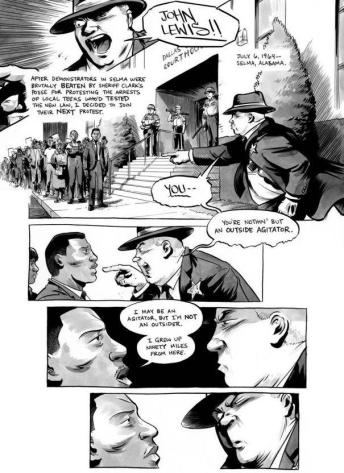 The storytelling of March is excellent and compelling. It is well supported and illustrated by the pretty good black and white art of Nate Powell. However it is sometime quite dark (lots of ink!) and the text in some speech balloons is way too small for my eyes — I guess the artist wanted to express the sound level of distant speech. This book is a real history lesson, and the perfect way to learn about the Civil Right Movement.

Strangely, everything I read in this comics sounds familiar. It seems that what’s happening right now — Black Lives Matter, the increasing violence against minorities and even from the government itself — is eerily similar to the situation during the civil rights movement. We all thought that our society had made great progress since then, but sixty years later we realize that we find ourselves at the same point! The disease is apparently running deeper. It laid more or less dormant for a while but seems to have been awaken by the “insult” of having a black president, creating a slow resentment. Now, with the strong encouragement and even its institutionalization by President Trump,  there’s an increasingly strong push back against all civil rights (of the ethnic origin, sexual orientation, gender or all sort of minorities) by the conservative Republicans (mostly the religious right). The United States are really in need of strong and comprehensive reforms to address this pervasive problem…

History is repeating itself (to quote Battlestar Galactica, “All this has happened before, and all this will happen again” — which seems inspired by the Bible, Ecclesiastes 1:9) but it shouldn’t ! That’s why reading this comic is extremely important. If you understand the problem of the civil rights in the fifties and sixties — the what, why, who, where and how of it — you will understand what’s happening now: what it means, why it is so important. And maybe we will start to see how all this pervasive ethno-socio-economic inequity could be solved.

Reading this book is an absolute must. It is an easy way to understand a complex problem that affects all our lives — but mostly the black lives. It really matter. Read it. Now.