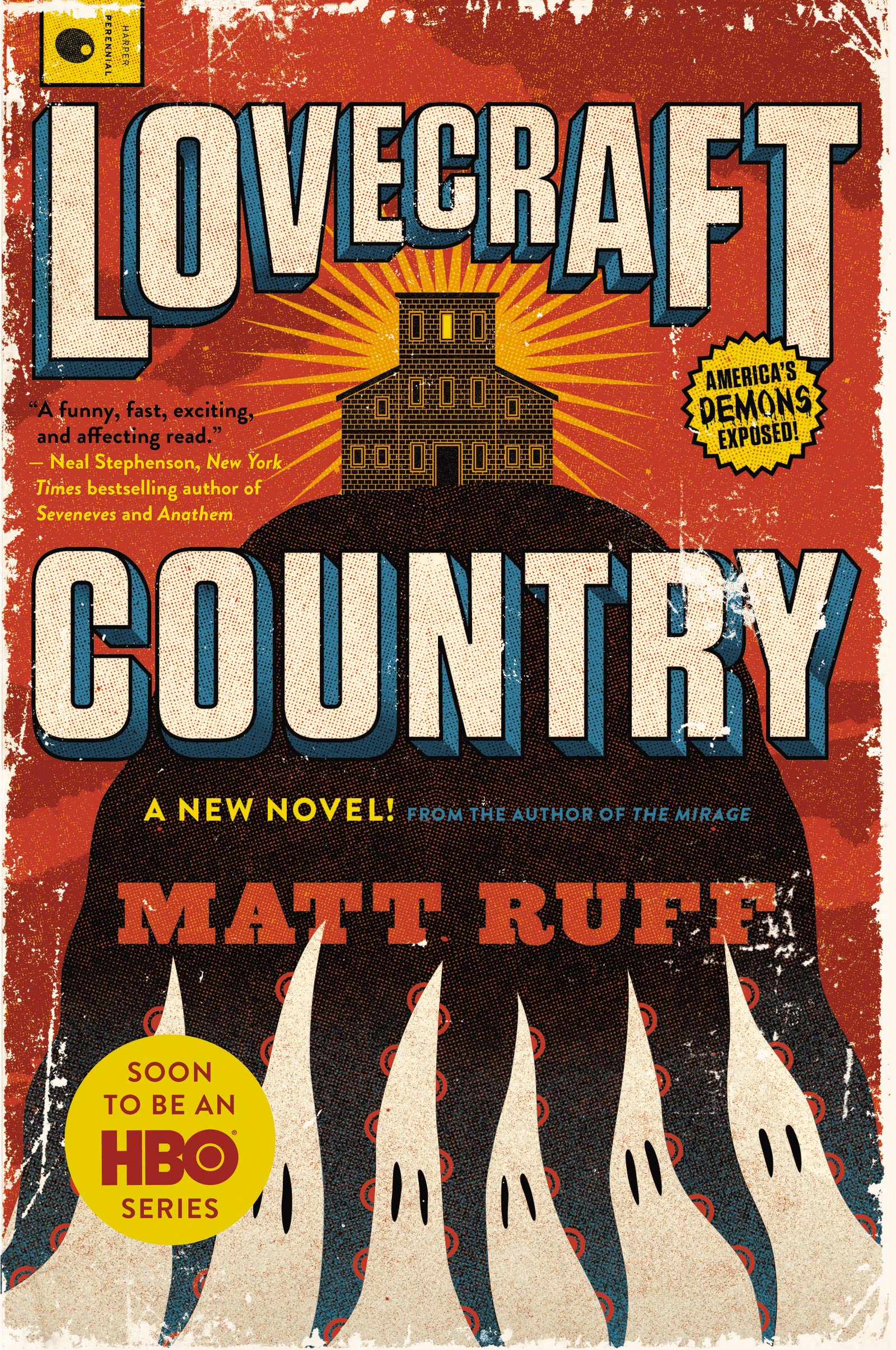 “The critically acclaimed cult novelist makes visceral the terrors of life in Jim Crow America and its lingering effects in this brilliant and wondrous work of the imagination that melds historical fiction, pulp noir, and Lovecraftian horror and fantasy.

Chicago, 1954. When his father Montrose goes missing, 22-year-old Army veteran Atticus Turner embarks on a road trip to New England to find him, accompanied by his Uncle George—publisher of The Safe Negro Travel Guide—and his childhood friend Letitia. On their journey to the manor of Mr. Braithwhite—heir to the estate that owned one of Atticus’s ancestors—they encounter both mundane terrors of white America and malevolent spirits that seem straight out of the weird tales George devours.

At the manor, Atticus discovers his father in chains, held prisoner by a secret cabal named the Order of the Ancient Dawn—led by Samuel Braithwhite and his son Caleb—which has gathered to orchestrate a ritual that shockingly centers on Atticus. And his one hope of salvation may be the seed of his—and the whole Turner clan’s—destruction.

A chimerical blend of magic, power, hope, and freedom that stretches across time, touching diverse members of two black families, Lovecraft Country is a devastating kaleidoscopic portrait of racism—the terrifying specter that continues to haunt us today.”

This is a tale of two horrors. First, it is the story of an extended black-american family that has to deal with a covenant of powerful and ruthless warlocks trying to bring back Adam’s paradise on Earth and, in order to do so, are in search of lost knowledge. Above all, it is the terrifying story of what it is for black-americans to live through the 1950s Jim Crow America. It is told through eight short stories that are interlinked, each focusing on one member of the family and using a different sub-genre of horror for its storytelling.

In “Lovecraft country”, Atticus Turner receives a letter from his father, Montrose (with whom he always had a difficult relationship), telling him that he found some genealogical information about his deceased mother and that they should go together to Arkham — well, he misread the letter and it is actually Ardham, Massachusetts, but it is still in the middle of what he calls “Lovecraft country”. He comes back to Chicago but his father has disappeared. Along with his uncle George Berry and childhood friend Letitia Dandridge, he goes on a road-trip — dodging all sorts of racist dangers — to reach the Ardham Lodge, owned by Samuel Braithwhite. There, Atticus discovers that he is the descendant of the Braithwhite ancestor, Titus, and that his father was kidnapped in order to set a trap for Atticus who is needed for a nefarious ceremony of witchcraft. With the help of Samuel’s son, Caleb, Atticus frees is father, foils the plan of the elder Braithwhite (killing him and all the members of “The Order of the Ancient Dawn” in the process) and escapes (mostly) unhurt.

In “Dreams of the which house”, Letitia inherits some money and she uses it to purchase a huge house in the middle of a white neighbourhood, which causes her many pains and harassment. On top of that, she discovers that the Winthrop House is haunted by his previous owner, Hiram Winthrop. After many troubles, she succeeds to strike a deal with the ghost. However, it is revealed that Caleb Braithwhite is behind the sale of the house to Letitia, as Hiram was a friend-turned-rival of his father and in possession of a precious item that he covets.

In “Abdullah’s book”, Caleb steals a family heirloom from George and Montrose and, in exchange for its return, asks them to break in the natural history museum to retrieve a book from a secret room. Helped by the members of their Freemason lodge, the brothers will undergo a dangerous Indiana Jones-style expedition through tunnels and riddles, to recover Hiram’s “Book of Names”.

In “Hippolyta disturbs the universe”, George’s wife discovers a secret compartment in an orrery (the mechanical model of an unknown solar system) of the Winthrop House, containing a book and a pair of keys. If George and his nephew have always been fans of pulp-style science-fiction and horror stories, Hippolyta had always been fascinated by physics and astronomy. The book brings her to an observatory in Wisconsin but, instead of a telescope, she finds a machine that open doors through time and space! She finds herself on a sandy beach on an alien planet from a distant solar system inhabited only by Ida. She had been exiled there by Hiram Winthrop two decades ago, along with all the domestic staff of the house, to scare them into telling him where his son Henry went. He had run off with one of the maids. But Hiram died before he could free them and all the other had perished, killed by the alien flora and fauna of the planet.

In “Jekyll in Hyde Park”, Ruby — Letitia’s sister — in contacted by Caleb who want to use her to gain information on Atticus and Letitia, and to spy on members of other warlock lodges. In exchange, he offers her a potion that can transform her into a white woman! She discovers what real freedom is, but also that it comes with a price…

In “The narrow house”, Atticus and Montrose are trying to locate Henry Winthrop, who ran off from his father’s house with a black maids and some of his father’s precious notebooks. Tasked by Caled, they follow his trail to Illinois but find out that his entire family was killed when their house was burned down by a racist mob. However, due to a protection spell gone awry, Montrose is able to get information (and the notebooks) from his ghost. However, Atticus and his father decide not to share the books with Caleb.

In “Horace and the devil doll”, the head of the Chicago lodge, police Captain Lancaster, is suspecting that Caleb want to renege on their deal and betray him. He also knows that Hippolyta visited the Warlock Hill observatory, but doesn’t know her exact involvement. He therefore decides to use George and Hippolyta’s talented son, Horace, to spy on her. As the boy refuses, Lancaster curses him with a powerful spell that makes him being pursued by some sort of voodoo doll (revenge of Chucky style !). Being unable to speak, Horace is able to alert Ruby to his ordeal by using Scrabble tiles, and she then enlist Caleb to help break the spell.

In “The mark of Cain”, all the members of the Turner/Berry/Dandridge families finally share each other stories and decide, while feigning to help Caleb take over all the lodges, to prevent him to accomplish his plan. With the help of Hiram’s ghost, they find his weakness and strip him of his powers. In an “Epilogue”, we see that, in the aftermath, all the family members goes on happily ever after.

If the book is not horrific in the way Lovecraft’s stories are, it nevertheless offers an interesting twist on Lovecraft universe and influence. However, Lovecraft Country has been adapted into a TV series that add elements (a few monsters) that are closer to Lovecraft’s stories. The TV series change several details of the book’s story (mostly Caleb is a woman named Christina and Horace is a girl named Diana) and add several side stories (adding some Asian horror with the character of Ji-Ah, a Korean friend of Atticus whose also a demon) that make it more captivating and complete. In comparison, and looking back at it, I would say that the book’s storytelling seems a little disappointing.

Lovecraft Country is nevertheless a very interesting book that offers a great read. However, you can always save time by watching the excellent TV series.